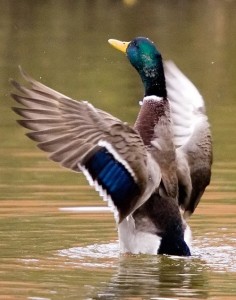 This week I have had the pleasure of working with the Canal and River Trust at Bingley Five Rise Locks to support the launch of Britain’s first canal-side QR trail.

During the week, several schools visited the site to learn all about the history of the canal, the people that lived there and the wildlife that now relies on it. The five rise is an excellent place to visit as it is steeped  in local history and has a very rich array of wildlife. The locks themselves are over 200 years old and were completed in 1774. They are the steepest locks in Britain to this day, carrying the canal 18 meters into the air. It is no wonder it has been chosen as the first site for the new exciting QR code trail.

Between Bingley and Saltaire there are over 20 QR (Quick Response) signs. When on site, you can scan any of these codes with an ipad or compatible phone. Special software will detect which QR code you’re scanning and direct you to a page all about  that particular aspect of the canal. There’s a wide choice of subjects and information which includes photo slideshows, videos and interviews. 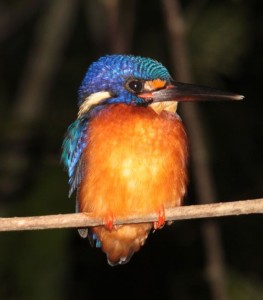 Right next to five rise is the North Bog. On Saturday, Nature Talks and Walks were running wildlife tours of this area, giving local people the chance to see their neighborhood in a completely different light. With the brilliant sunshine we had on the day, we saw all sorts of canal-side creatures. To name but a few, there were ladybirds and goldfinches, herons and kestrels and even a kingfisher who decided to stop right in front of us and go fishing. It successfully caught a small fish, proceeded to knock it unconscious by hitting it on it’s perch before flying over the locks and across the public footpath where two families were completely unaware of the small blue dart flying past them. It was a perfect example of how you might know somewhere like the back of your hand, but stop and look for a moment and you’ll be amazed what new things come to light. 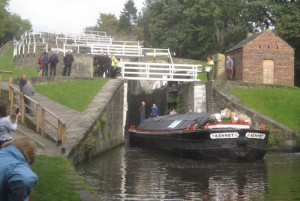 Another unseen species that is known to be on site is the White-Clawed Crayfish. This indigenous species is in trouble in our waters as there is an American invader. The American signalling crayfish is larger and more aggressive than our British species and is slowly putting it in danger. They are also susceptible to pollution and pour water conditions. All this means that conservationists must work extremely hard to monitor the white-claws and remove as many of the signalling crayfish as possible. Thankfully, there are currently no American crayfish at Bingley. 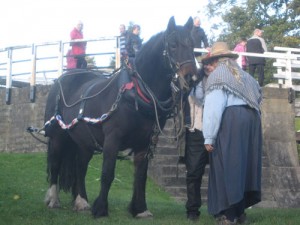 The launch itself was also graced by a lather large celebrity. Bilbo the Horse, with his owner Sue Day, was the first horse to pull a barge the entire length of the Leeds-Liverpool Canal in 68 years. To celebrate the opening of the new trail, Bilbo helped bring a barge down the Five Rise Locks once again to great excitement of many on-lookers.

The week has been an unquestionable success and with luck, there may be a new QR tail opening at your local canal soon too!