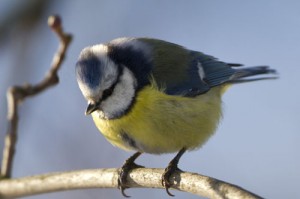 Key Features: Blue tits are small, common garden birds. Both the male and female have the same impressive mixture of colours: yellow stomach, blue wings, green back with a white and black mask. Although similar in appearance to the great tit, blue tits are smaller and have a blue ‘cap’ on the top of their heads whereas the great tit has a black cap. 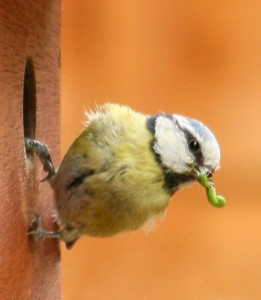 Their calls are short, high pitched and repetitive. Blue tits have many calls for different purposes, but one of the main calls sounds like a low giggle or chuckle, as if the bird is watching you from the trees and laughing at you behind your back…

Where in Britain: Can be found throughout the UK and have become a regular visitor to towns, parks and gardens.

Habitat: The blue tit is a woodland bird found in both coniferous and deciduous forests. These birds are indigenous right across mainland Europe and even North Africa. There are various sub-species across these continent, adapted to the different temperatures and climates. Despite this, they all look very similar to one another.

Food: This species has a wide and varied diet. At different times of year it will concentrate on different food groups depending on availability and breeding. Blue tits are known to eat insects, larvae, seeds, nuts and newly developed tree buds. They always love gardens that put mixed seed into feeders for them as it can be a lifeline through the winter. 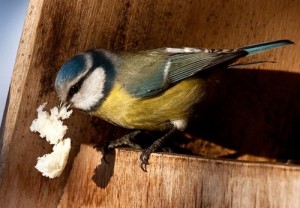 Breeding: Blue tits nest in hollows in trees and are always eager to make use of a garden bird box. It is this reason that both the male and female look alike. Normally, a female bird would need excellent camouflage as she would be easily spotted by predators whilst sitting on her eggs. Because the blue tit chooses to lay her eggs out of sight, she is able to adopt the same colours as her mate. This may help them recognise each other from a distance.

Females lay large clutches with around 8 eggs per nest. A pair of blue tits will return to the same nest box each year. When this pair dies, a new pair will eagerly take their place as they are always competing for nest sites with Great Tits and House Sparrows.

After the chicks leave the nest, the parents will continue to support and feed their offspring to give them the very best start in life, as captured on film by Simon Knott – fledgling blue tits being fed. 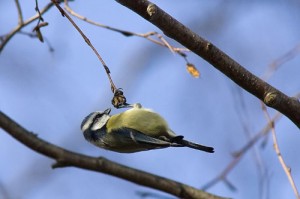 Behaviour: The blue tit is an active little bird that can often be seen hopping through the branches of large trees. They are extremely dexterous and able to balance on small twigs in order to reach a meal. During winter months, small flocks of blue tits will join forces with flocks of other birds such as great tits. This may be because more birds have a better chance at spotting potential food and keep a look out for potential predators.

Conservation: With populations spreading right across Europe, the blue tit is currently Least Concern and is widespread. Population numbers vary year on year and the wet conditions of 2012 may have affected their breeding success. However, on average their population is stable.

Did You Know: The name ‘tit’ comes from the Old English term ‘titmouse’ which implied something small. Over time this term was shortened and we now call the entire family just by the word ‘tit’.

Leave a comment below with suggestions for the next Wild Files. Have you ever had blue tits nest in your garden? How many chicks did they raise? Why not share you’re story by leaving a comment below and sending any pictures to: