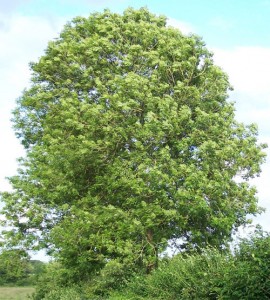 Welcome to the British Wild Files, where you can find out all about indigenous Species of mammal, bird, reptile, amphibian, fish, insects, plants and fungi. Each Wild File will focus on one species and have information on vital statistics, appearance, ecology, behaviour, reproduction, location and conservation as well as much more.

This week has a topical twist to it as we look at the successes and potential problems for the Common Ash. 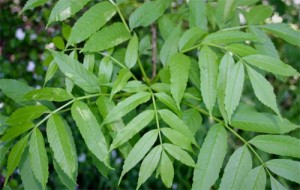 Height: Up to 40 meters tall

Key Features: A common and tall tree with a round, oblong shape. Each leaf actually comprises of several small ‘leaflets’ which have serrated edges and a pointy tip. Small purple flowers bloom in clusters in late spring. These eventually become seed pods which are long, green and also clustered together. Unlike the similar looking mountain ash (rowan), this tree does not produce red berries.

As a deciduous tree, it will drop it’s leaves in winter and enter a state of dormancy. 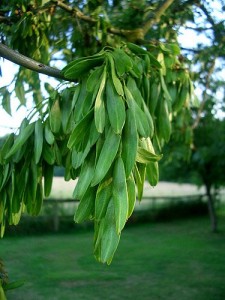 Where in Britain: One of the most common trees in the UK, the common ash can be found in many woodland habitats, sometimes becoming the dominant species in the forest. Found across Britain and mainland Europe.

Habitat: When ash trees mature, they offer a thin canopy layer that allows sunlight to filter down to the forest floor. As a result smaller flowering plants are able to grow in it’s shade, including bluebells. The ash can also grow in hedgerows.

Relationship with humans: Ash is an important timber-producing wood, being both sturdy and flexible. In the past the wood was used to create shields and weapons and today it is still used to make an array of items including sport equipment, furniture and walking sticks! 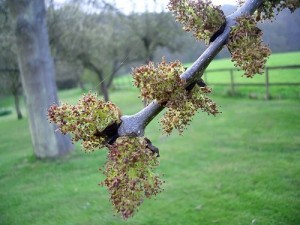 Reproduction: Both male and female flowers can be found on the same tree and appear as a small cluster of green stalks and purple flower heads. The seeds these eventually become are light and delicate. This is because they are designed to be carried by the wind. This is an easy, ancient and very effective method of dispersal as it can carry the seeds large distances away from the parent tree which reduces direct competition for resources. These seed pods are commonly called ‘keys’.

If you see a tree that looks like a common ash that has red berries instead on seed pods, you’re looking at a Mountain Ash or Rowan which, although appears very similar, is actually completely unrelated. 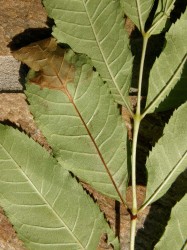 Conservation: In 2012, Ash Dieback disease was first reported in British Common Ash. The fungus that causes this disease (Chalara fraxinea) has been found widely across Europe over the last 20 years and one theory of how it has spread to Britain is via contaminated wood from mainland Europe. It causes the loss of leaves which can eventually kill the tree. Conservationists and politicians are currently determining the best course of action which includes a ban on ash imports into the country.

Sightings have so far mainly been in the South East of the country but conservationists need people to be vigilant in spotting infected trees. Look for unnatural brown marks on the leaves or for trees with bare branches at the top. For a full description of what to look for, have a look at the Forestry Commission advice page here: Ash Dieback Disease.

To report a sighting, please contact one of the following people at the Forestry Commission:

Did You Know:  In mythology, the common ash has always had a close link to various gods and goddesses, been seen as a symbol of protection and the ‘keys’ were believed to cure flatulence!

Leave a comment below with suggestions for the next Wild Files. Have you seen any evidence of Ash Dieback near you? How many trees have been affected? Why not share you’re story by leaving a comment below and sending any pictures to: