Welcome to the British Wild Files, where you can find out all about indigenous Species of mammal, bird, reptile, amphibian, fish, insects, plants and fungi. Each Wild File will focus on one species and have information on vital statistics, appearance, ecology, behaviour, reproduction, location and conservation as well as much more.

In this Wild File you’ll learn all about a cunning animal that is able to cope with even the coldest of winter days and has even started to share our homes. 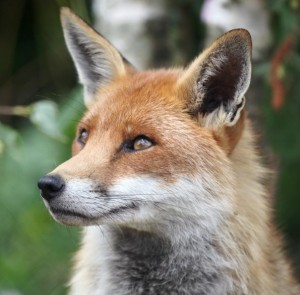 Key Features: One of the most recognisable of Britain’s mammals, the red fox resembles a small, red canine with large black ears, white fur under the neck and belly and a white tip on the end of a bushy tail. They are a social mammal, living in family groups led by a dominant pair. This is the same social structure that wolves have. A male fox is called a dog, a female is a vixen and a juvenile is called a cub.

Habitat: Foxes in the UK live in many different habitats. They do well in woodland and farmland but can also be found in mountainous regions, grassland, coastal areas and increasingly in urban habitats such as large cities and towns. 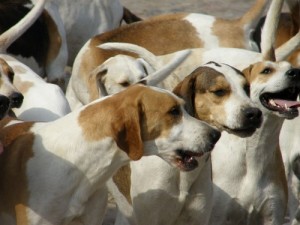 Relationship with humans: Throughout the centuries, the red fox has had a troubled history with humans. Although the animal does feature in local folklore and mythology, they have also been prosecuted as pests, killed for their fur and even hunted for sport as recently as 2004. Amazingly, this wily predator has been able to out-smart it’s human pursuers long enough to see a ban on fox hunting and is now found right across our country.

It still isn’t all plain sailing for the fox though. Whilst many people find these animals charismatic,  endearing and entertaining, living with them can cause structural damage and bring health and safety into question. It is a constant balancing act to keep both humans and foxes living in co-existence. 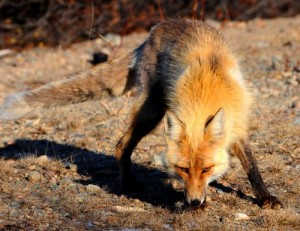 Reproduction: Only the dominant male and female will breed in a family group. Foxes normally mate back to back which can make it appear that they become ‘stuck together’ as dogs do. The dominant pair will breed in winter and in spring the vixen will give birth to a litter of 4-6 cubs. Young foxes will stay with their family to help their parent raise the next generation, thus increasing the chances of the family’s success.

Diet: Foxes are omnivores and opportunistic  They specialise in hunting small rodents such as mice, rats , squirrels and rabbits. The will also eat birds such as pheasant and waterfowl as well as insects, berries, carrion and sometimes even young deer. Because of their varied diet, foxes have been able to spread into human cities by feeding on the large population of rodents there as well as everything that humans throw out. 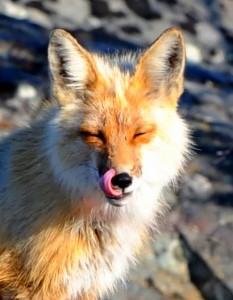 Behaviour: Foxes are mainly active at the twilight hours between day and night. We call this type of animal crepuscular. They spend much of their hunting time alone using their large ears to listen out for the movement of small rodents. To mark their territory, dominant males and females use urine. Family members communicate with each other using scent and various noises, included the infamous ‘bark’ which is normally made by the female during the winter months.

The whole family resides together in an underground den. This is where they can hide and be safe throughout the day and during periods of bad weather. 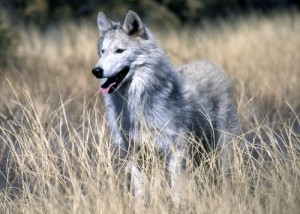 Predators: In Britain, the red fox’s biggest fear is man and the hunting dog. In the past, it could also have been hunted and eaten by wolves and bears. Large birds of prey, such as the golden eagle, are also capable of hunting adult foxes.

Conservation: The red fox is common across the Northern Hemisphere, although in some areas of the World they are in fact an invasive species. After being deliberately introduced to Australia in the 1870s, the species ran wild, in hot pursuit of the European rabbit. Its strong family structure and opportunistic behaviour has enabled it to spread far across Australia. Over predation of local species could lead to extinctions, so necessary precautions need to be taken for the conservation of Australia’s natives.

Did You Know:  Red foxes don’t just come in reds, but can be found in a mixture of colours including browns,  whites, blacks and even silvers!

Leave a comment below with suggestions for the next Wild Files. Do you have any wild foxes living near you? Why not share you’re story by leaving a comment below and sending any pictures to: