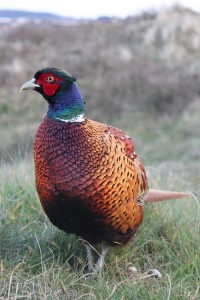 Key Features: The male pheasant is a colourful and vibrant bird, with a golden brown mottled body, a dark green head, large red patches around it’s eyes and a white collar. If that wasn’t enough the bird also boasts short ear tufts on top of it’s head and several long, striped tail feathers that can reach up to 50cm! In comparison the female is somewhat ‘duller’. She is smaller, with a shorter tail and is a light mottled brown colour all over. This is because she needs camouflage whilst sitting on her eggs to hide from predators such as foxes. As the male has nothing to do with the nest, he does not need this camouflage. Chicks are yellow with brown stripes.

The Pheasant’s call is a two note ‘Carr Ccaaaarrrr‘. In the spring, males also follow this with a flurry of wing beats.

Where in Britain?: Pheasants are found right across Britain, but are originally from South-East Asia in countries such as China and Taiwan. These birds are now found across the globe as a game bird and were introduced to Britain (for the second time) around the 1830s and they have been the target of shooting sports ever since. 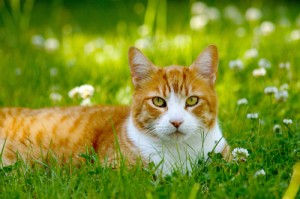 Habitat: The pheasant is a woodland bird but is also a common sight in farmland. It is not known what would happen to the British population if they weren’t supplemented by new birds each year but the birds seem to cope well with British weather.

Food: Pheasants feed on invertebrates, seeds and fruits. They only feed on the ground as this is where they spend most of their time.

Predators: In Britain the biggest dangers for Pheasants (other the humans) is the Red Fox and the domestic cat. Young Pheasants are also at risk from large birds of prey, such as Sparrowhawks. 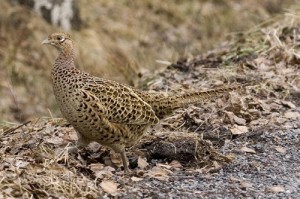 Breeding: Males can often be seen shepparding a harem of females in the spring. Around 10 chicks hatch from the nest any time from April to June and will stay with their mother for several weeks thereafter.

Behaviour: Out of the breeding season, Pheasants form small flocks and are not aggressive to each other. It is worth noting that in early spring males have only got one thing on their minds and in their race to chase the females (or other males away!) they tend not to notice streets, roads and especially cars! You have been warned!

Conservation: Due to the success of the Common Pheasant as a game bird and their ability to breed very easily, the birds conservation status is Least Concern. They are still looked after though by the Game & Wildlife Conservation Trust.

Did You Know: Pheasants can be found in a variety of colour variants, including the stunning melanistic black pheasant.

Leave a comment below with suggestions for the next Wild Files. If you’ve ever encountered Common Pheasant, why not share you’re story by leaving a comment below and sending any pictures to: