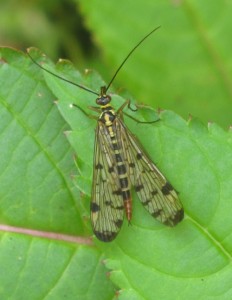 This week we focus on an unknown but fascinating insect…

Lifespan: Flies between May and September.

Key Features: These strange flies are common across the UK but are unlike many other species. As the name suggests, the male Scorpionfly boasts an impressive looking tail which closely resembles a Scorpion’s sting. However, only the male Scorpionfly has this because it is used in courtship with the female – there is no sting what so ever. The flies also have a long ‘beak-like’ snout that they use to feed. The wings are often clear with small flecks of black.

Where in Britain?: They are found across the UK and are a common garden species.

Habitat: Look for shaded areas of low foliage, particularly areas with lots of Bramble and Nettles. Across the world there are hundreds of different scorpionfly species found in varying habitats. 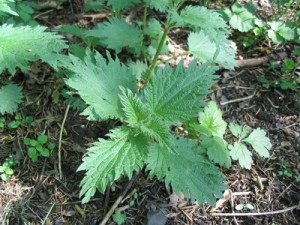 Food: These flies feed on dying and dead insect remains, using they beak-like mouths as a straw.

Breeding: Males use their wings and their tails to attract a female. He has to be careful during reproduction as the female could end up eating him. To prevent this, wise males will bring their mates some food (or simple saliva!) to keep them occupied. Eggs are laid in the soil where the offspring, that look like caterpillars, spend the infancy until maturing the following spring.

Behaviour: Scorpionflies are solitary insects. Despite having impressive wings this species does not fly very much, preferring to scramble over leaves and other foliage looking for food. 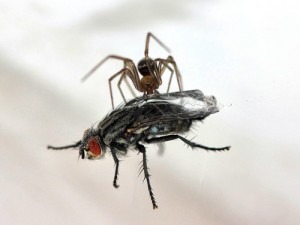 Conservation: This insects is common due to it’s diversity of habitat and diet, but we do not know their full range or population year on year. If anything happened to the species, it may go unnoticed which makes public awareness and participation in surveying ever more important.

Did You Know: Scorpionflies are opportunistic feeders and often attempt to steal food from spider’s webs!

Leave a comment below with suggestions for the next Wild Files. If you’ve ever encountered strange insects like the Common Scorpionfly, why not share you’re story by leaving a comment below and sending any pictures to: