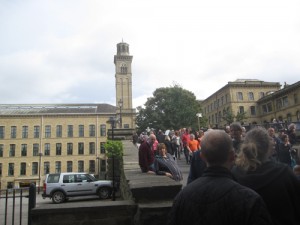 Last weekend I was at one of my favourite World Heritage Sites, surrounded by a huge choice of food, music and many happy and like minded families. It was, of course, Saltaire Festival which is situated near Bradford in North Yorkshire. Saltaire itself was set up by Sir Titus Salt, who wanted to raise the quality of working conditions for his employees. He was an expert in fabrics, and it is said he began his career after finding some abandoned Alpaca fibre at the Liverpool Docks. No expense was spared when creating Saltaire, with playing areas, entertainment, good housing and a fantastic church all provided. After three years of work, Saltaire finally opened in 1853 on Salt’s 50th birthday and it is still here today.

Saltaire Festival has now been running for 10 years and lasts 10 days, from the 6th to the 16th of September. There are all sorts of things to see, drink and taste and there’s lots of fun to be had for all the family. I was joining forces with the Canal and River Trust once again to help promote the new work that has been done along the canal. It has become the first canal in the country to use QR codes that are dotted all the way from Saltaire to Bingley Five Rise Lock. By using a Smart Phone or similar technology, you can scan the QR (Quick Response) codes which will bring up information on your phone about the site you are located. There are over 20 QR posts on this stretch of the canal covering a huge range of topics across the last 200 years! 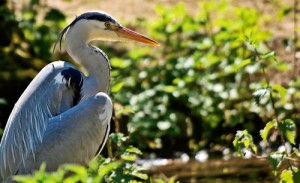 On Sunday I was running nature walks down the canal and I’m pleased to say I met some very keen participants. It was especially comforting to hear just how much the younger children already knew about British nature and they revelled in the freedom to ask as many questions as possible about wildlife and the canal itself. The wildlife of the Leeds-Liverpool Canal here is always very diverse because the canal is carried across the River Aire (hence Salt-Aire) which enables all sorts of species to move from the river, up to the canal.

The festival is still running until the 16th of September and if you’re interested in Heritage, Culture and Wildlife, then the Saltaire Festival is definitely not one to miss!