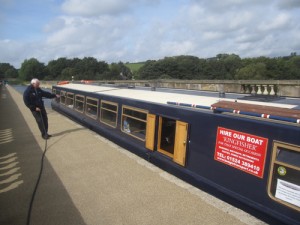 Last week I got the chance to join the Canal and River Trust on a tour of the Lancaster Canal and the Lune Aqueduct. The  journey started in the heart of the city, not far from the Water Witch pub. Parked on the side of the canal was the Kingfisher, a tour boat that can be hired out by large groups to explore the canal.

The Lancaster Canal has a long and interesting history. Designed by John Rennie in the late 18th century, it was originally planned to begin in Kendal running south through Lancaster and Preston to join up with the Leeds-Liverpool canal. Work began at both the start and finish of the canal and the two sections became known as the North and South Ends. To complete the canal, two large aqueducts would be needed, one to cross the River Ribble and the other to cross the River Lune at Lancaster. 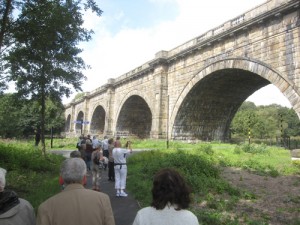 The Lune Aqueduct is a wonder of 18th century engineering. After 3 years the structure was completed in 1797 having cost just under £50,000! As the original budget was only set at £18,000, the developers massively overspent and there wasn’t enough funding to start work on the Ribble Aqueduct. As a result, the Lancaster Canal became permanently issolated from every other canal system in Britain, though remained an important trade route until the success of the railways pushed it out of business in the late 1800s.

Since then though canals have seen a resurgence of interest. The boating and leisure industry has been steadily growing over the past century with canals becoming busier than ever before. The Kingfisher is just one example of this. 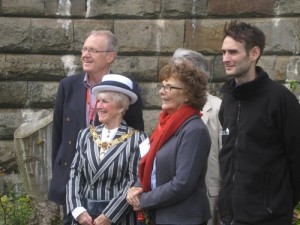 With the money that comes in from tourism and donation, organisations such as the Canal and River Trust and the Transport Trust are able to restore and maintain Britain’s lost waterways. The Lune Aqueduct was in need of repair itself after it sprung a leak in 2008! Since then the Transport Trust has been working hard with the Canal and River Trust to restore it to it’s former glory and I can say it looks brand new! As our group made it’s way down to the riverside where you can see the aqueduct in all it’s glory, we were met by the Mayor of Lancaster, Councillor Sheila Denwood. On behalf of the city of Lancaster and it’s people, she thanked both Trusts for their hard work and applauded them on the results.

The canal has an excellent mix of open countryside and views of Lancaster and it’s castle which makes it well worth a visit. The water and banks are also full of wildlife. Though if in a boat take care when crossing the aqueduct as it can get extremely windy at the top!