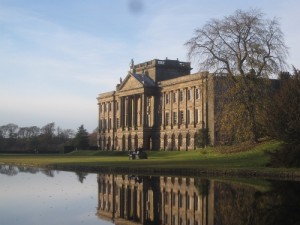 It’s been a busy couple of weeks at Nature Talks and Walks and over the last fortnight we’ve visited everywhere from Freshfields in Formby to Lyme Park in Manchester. Over 35 species were observed at Freshfields, including Primrose Russula fungus, over 20 Red Squirrels, Treecreepers and three species of harvestman. We were also lucky enough to witness a solitary red deer at Lyme Park, which appeared right at the end of the day next to the car park! 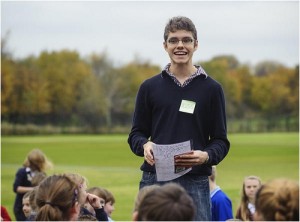 A big thank you to Wigan Council, who asked us to provide talks on biodiversity at their annual Eco School awards event. It was brilliant to see so many local schools achieving new Eco School Awards, and rightly so. The Mayor of Wigan, Councillor Myra Whiteside, was on hand to present each school with their appropriate award whilst we were in charge of spreading the word about how schools can help conserve British Wildlife whilst learning all about our fantastic biodiversity at the same time. Throughout the day there were many talks and activities (including ours) on a range eco-friendly topics. These including road safety, recycling, outdoor sports and many more.

Don’t forget to check out our topics page for our new talk ‘Winter Wonderland’ where you can find out all about what British Wildlife is doing at this time of year. Remember to watch out for Talks and Walks appearing around the North West in the following months at schools, museums and WIs near you!

We’ve also plenty of pictures sent into to us from people across the North West and further afield. Here are just a couple to bring a bit of colour into your life ahead of the cold months of winter.

The Parents of Pete’s Bull? 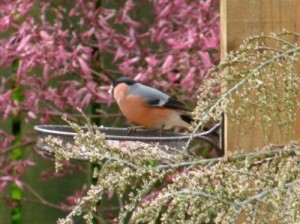 Earlier this year, Pete from Bolton sent in a picture of a beautiful young Bullfinch that had started visiting his garden. Pete’s since been back in touch with a pair of adult Bullfinches and is wondering if the young bird from earlier this year has grown up already? These birds are most likely the adults of the younger bird, but there is no way of being certain about this. The birds generally stay together, though will find a new mate if the current one passes away. 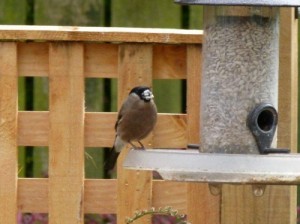 The male and female can be told apart easily, as whereas the male boasts a bright salmon-pink chest, the female has a duller brown colour. Both have a trademark black cap with a large ‘bull-like’ head and a strong, thick beak used for breaking into tough seeds. It’s always good to see these birds visiting gardens who normally travel in pairs like these two. 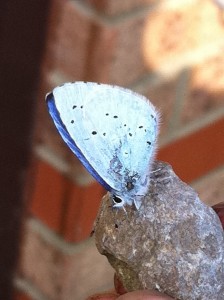 We also had a fantastic picture from Rachael in Thirsk of a blue butterfly she’d found whilst gardening. This butterfly would have been one of the last of this years and is called the Holly Blue. It is one of the most likely blue butterflies to be found in British gardens. This species produces two broods each year, the first relying on holly and the second on ivy. Whilst the upper wings are vivid blue, the underside (as can be seen in this picture) are a pale blue with several small black marks across the surface.

For more information on this fantastic species, have a look at the UK Butterflies ‘Holly Blue’ page.