Welcome to ‘Your Wildlife’, the section where we round up some of the best pictures and stories that have been sent in by you. This is a great place to share local knowledge of wildlife and solve any identification issues. Let’s dive straight in. 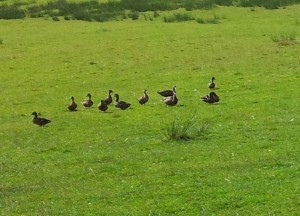 Bernie sent in a picture of a huge flock of ducks he spotted alongside the River Hodder that numbered over 50 individuals!. Although at first glance the look like regular mallards, have a closer look at the body shape. They seem much bulkier than a normal mallard. For this reason I suspect these are domesticated ducks. There are various breeds of domestic ducks descended from wild Mallards, some bred for egg production and others for meat. These birds look like the latter and my guess would be that they are a breed called Rouen ducks or something along those lines. You can find out more about various duck breeds, including the Rouen, here – The Majestic Rouen.

It’s worth noting that at this time of year most ducks are in their annual moult where they completely replace their feathers with a new set. As a result, male ducks adapt a female colouration to improve their camouflage whilst stuck on the ground. This is why it may seem that male ducks have gone ‘missing’ recently. Rest assured, they will return to their former glory soon. 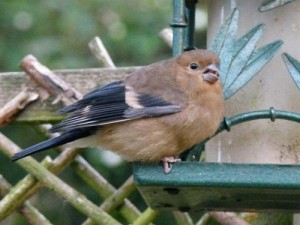 Taken earlier in the year, Pete from Bolton has sent in this amazing picture of a young Bull Finch. Normally the adults of this bird can be identified by a black cap that covers the eyes, a short stubby beak used to open up seeds and berries and (in the male) a bright salmon pink chest. The call of the Bullfinch sounds like it is singing ‘ONE, TWO, THREEEEEEEE‘ in high pitched, sweet sounding notes. They can be seen all year round but are generally not flocking birds, normally travelling in pairs.

This young bullfinch will have been born in a nest deep inside a hedge or bush with around six other hatchings. This is the only time in it’s life that it will have this plumage which makes this picture very special. 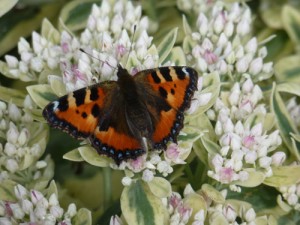 Bob sent in a picture this week of a Small Tortoiseshell he saw in Bretherton. There was once two species of Tortoiseshell found in Britain, the small and the large. Unfortunately, the large tortoiseshell is largely agreed to be extinct in Britain. The reasons for it’s absence are not completely understood but some theories include climate change and loss of habitat.

In general Small Tortoiseshells can be seen from April onwards when they emerge from hibernation. They are able to survive in a number of different habitats due to their food plant being nettles and as a result can be found just about anywhere, from mountain top to city centre. However, as with many butterfly species, there does seem to have been a decline in adult numbers over the past few years. It is important to monitor your local population and keep a record as they could face a difficult future with a constantly changing landscape and climate. If so, we need to know as soon as possible. There are also a few more inventive ways of aiding in this species’ conservation.

A BIG thank you to everyone who has sent in their pictures this week.