On the 19th August 2012 I set out for the seaside. Instead of a bucket and spade though I had my trusty binoculars in hand as I was on the hunt for Red Squirrels. The Formby National Trust reserve is one of the best locations to observe these red rodents in the North West, within easy reach of all major cities and towns. The area also boasts a variety of completely different habitats with loads of plant and animal species to see. 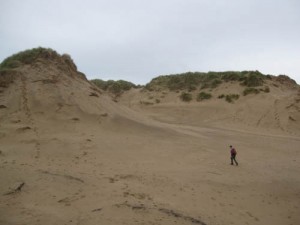 Parking at the bottom car park I couldn’t resist checking out the sand dunes and beach before moving onto the forest. I wasn’t disappointed. The sand dunes are spectacular. It felt like I’d joined the Mars Rover on the surface of the Red Planet with huge sandy hills and deep canyons that are constantly shifting.

It was also impressive to see that recycled Christmas Trees are being put to good use here. Last year’s trees have been planted at various points along to coast to help the construction of new dunes. Over time, sand will build around the dead trees which helps maintain and develop the habitat. 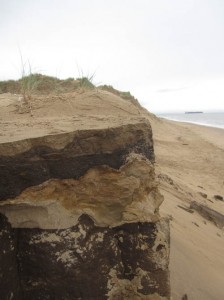 If you’re a geologist you’ll love the beach at Formby as it offers a real insight into the recent past. Walk along the coast and you’ll see that parts of the dune have collapsed, giving you the chance to see it’s sediment layers formed over thousands of years. Look at the lower sediment levels and you’ll find a peaty (and smelly) substance along with remains of ancient pine wood. These can also be found across the beach at low tide. The peat demonstrates that in the recent ice age the sea levels were so low that an entire forest covered what is Formby’s coast. Recent discoveries have also shown how people used to literally live ‘Under the Sea’. 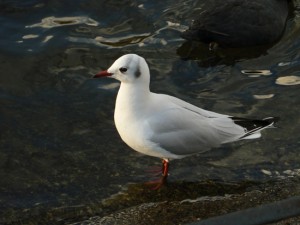 There is also a lot to see here in terms of wildlife. On Sunday I saw various plant species, Sand Martins, Oystercatchers, Black Headed Gulls, Greater Black Backed Gulls and Common Sandpipers. If you go to Formby at this time of year, keep a trained eye on the horizon too, as huge flocks of migrating geese can often be seen. These flocks form enormous ‘V’ shapes above the coast and were seen taking flight from further south, flying to the North before heading out into the North Sea.

In part 2, we’ll head into the forest in the search of the Red Squirrel.

One last note, if you do venture down to the dunes, keep you’re camera away from the sand – the two don’t mix!