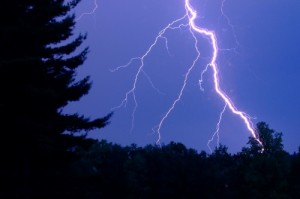 If you were looking out of the window on Monday night you may have been met with a very bright and loud surprise. As the thick snow and fierce winds lashed across the North-West, the sky was lit up by blue lightning followed by the low rumble of thunder. It may have seemed like the world had been turned upside down but ‘Thundersnow’ is actually a natural phenomenon. 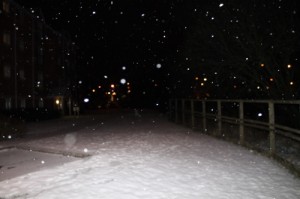 As freezing air passes over warm seas and oceans, warm air particles rise and eventually freeze. These particles later fall as snow. When these particles collide with one another, a negative charge is knocked off which begins to accumulate at the bottom of the cloud. With a positive charge now built up at the top of the cloud, this results in a spectacular show of a lightning storm combined with snowfall. Luckily, these events are quite rare, making you very lucky if you were able to catch the flash. For an example of this phenomenon, check out this video from Baltimore.

This spring has already had bouts of warm weather followed by freezing temperatures, a trend that is set to continue. The on/off snow fall that followed a mild winter could have a dangerous side affect for our wildlife. We will only know what the full extent of the fickle weather is later in the year, but for now keep offering food, water and especially shelter to your local wildlife to give them a helping hand.

Leave a comment below if you saw the ‘thundersnow’ and you could be featured in next week’s blog! You can also send your wildlife pictures to: