A short drive from the middle of Manchester is the charming village of Lymm. The village offers great strolls and sights including a fascinating war memorial. Lymm is also unique as within a stones throw from the village centre is the Lymm Dam, a tranquil and peaceful setting for walkers and nature lovers. 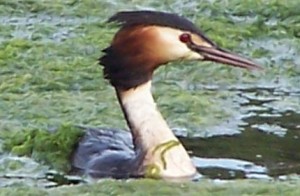 With the large amount of rain we’ve had this Summer the dam is currently extremely high, giving visitors the perfect opportunity  to witness the overflows and waterfalls at full force. The waters are clear and if you watch for long enough you will be able to spot the lazy shapes of large fish beneath the surface slowing meandering their way through the dangling tree branches. Out in the middle of the water are also a pair of Great Crested Grebes who have just completed a nest.

Surrounding the water is a perfect mixture of dense forest and open lawns. It was here that an age old question can finally be answered. Ok maybe not an age old question but it still stands – how do squirrels move on the ground? If you’ve ever seen a squirrel moving around on the floor it most likely bounded along fairly quickly. It seems the squirrels of Lymm are slightly more laid back.

Instead of wasting energy hopping, these squirrels prefer to slowly ‘waddle’  across the forest floor, making sure not to let their tails touch the ground. They seem to have little fear of people and are very curious (whilst being cautious), slowly walking within a few feet, standing on hind legs and giving you an expectant look.

If you’re looking for a peaceful getaway from the busy city, check out Lymm Dam. You can use the postcode WA13 9NJ which will take you directly to Lymm. Park up and head South and you’ll find the dam easily. 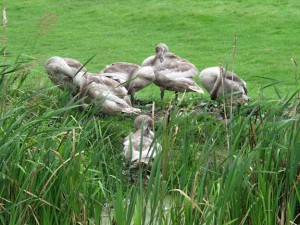 This week’s Wildlife Spot comes from Bernie who took some pictures of a family group of Mute Swans on the canal in    Bury. Mute swans are the only year long resident swan species in the UK and as a general rule, male and female do pair up for life. Signets like these will stay with their parents for six months before the adults chase them away to reduce competition for future broods.

It’s worth noting that, as far as I know, nobody has ever suffered from a broken arm from a swan’s wing. The closest anybody has come was a researcher who received a broken nose during a swan census. If you have a story of cheeky swans (or have ever got on the wrong side of one) feel free to leave a comment below sharing your story.

Keep your pictures coming in and you may well appear in future blogs.