Alder is a common tree across the British Isle and is one of the easiest to identify in late winter. But what are the cones that are covering it’s branches in late winter?

Male flowers like these are known as catkins and can be found in various different species. Look for a tree with a ‘purple hue’ from a distance though and it will probably be an Alder. How many do you have near you and what have you found living among the Alder cones?

If you enjoyed this video, be sure to check out our other videos and subscribe to our Youtube Channel. 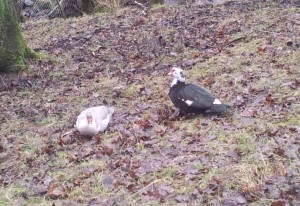 This week, Bernie from Bolton emailed in with a picture of an unusual duck…

“I was out walking in Burnley  last week and we came across a pair of ducks. We weren’t sure what breed they are – can you tell me please? And also was it a male/female pair as their feathers are so different – what do you think?” 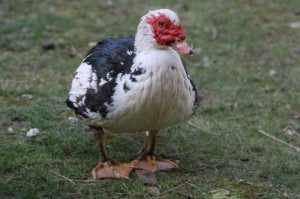 Thanks for emailing Bernie. These ducks are feral Muscovy Ducks. Originally from South America, they are one of the few farmland ducks not to be descended from the Mallard. As for the sexes, it’s difficult to tell. Feral Muscovies have a wide variance of colouration so male/female patterns are not uniform. In the breeding season, the males have much redder faces and also a crest on their heads. Fully grown they are also notably bigger than the females, so I would guess that these two birds are last year’s ducklings, with a male on the right and a female on the left.

Leave a question, picture or comment below and you could be featured in our future blogs! You can send any queries or pictures to:

Take care and remember, stay on the wild side!