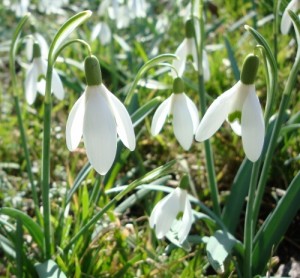 The dangling white flower of the snowdrop is an instantly recognisable spring sight in gardens, parks and woodland right across the UK. From January to April these plants emerge from the frozen soil and come into flower. This year, there have been some reports that snowdrops  have started sprouting as early as late December due to the milder winter of 2012. Because they are one of the earliest flowering plants to bloom in Britain, snowdrops are often considered a sign of warmer weather ahead and bring the promise of spring.

Although considered a British plant it is possible that our snowdrop is in fact not native at all, as no known record of the species exists here before the late 1700s. This could mean that snowdrops were brought over from the continent  either by accident or for ornamental planting. Whatever the reason, they have since established themselves as one of our most recognised spring flowers with whole festivals being dedicated to them. 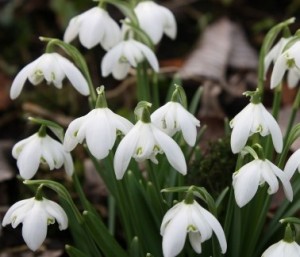 Snowdrops can often be found in clumps because just like daffodils and bluebells, snowdrops grow from bulbs. Because of the lack of pollinating insects at the start of the year, the main way snowdrops reproduce is bulb division where a new bulb will grow from an old one. Due to this successful reproduction strategy, snowdrop bulbs can be readily bought to add a bit of life to your winter garden.

Have you spotted any snowdrops this year yet? Share your story with us and be featured in our next blog. You can leave a comment below and send any pictures to:

Also remember to subscribe to our blog at the top right of the screen for updates on events, what to see, British Wildfiles and much more.