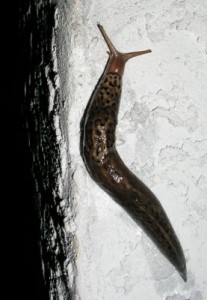 Among the creepy crawlies in the garden are a few slimy creatures that many people shy away from. Slugs are like nothing else in British wildlife. Their bodies produce slime making them difficult to pick up let alone eat and they have an insatiable appetite. These animals are often seen in large numbers after recent rain, although even they struggled with last year’s deluge (2012). But where do slugs come from?

Slugs are part of a group of invertebrates called molluscs.  These are boneless, soft bodied creatures that include slugs, snails and octopuses. Molluscs are often found living in water and have much thinner skin than ours. As a result, they have no control over the movement of water  that makes up most of their body. If left out in the hot sun, they would simple dry up. 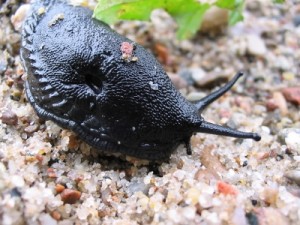 For water living molluscs this isn’t such a big problem but for land slugs, this is a huge obstacle. To survive on land, slugs spend most of their time underground. Beneath the surface, they are protected from the sun, predators and there is more water available. Once the sun goes down, slugs rise to the surface to feed in the cool of the night. If you head outside with a torch after dark, you probably find slug trails all over buildings, pavements and rocks. 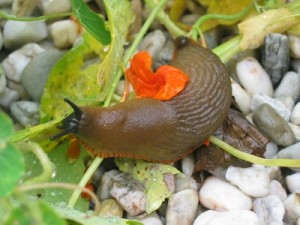 When looking for a cool place to rest, slugs do sometimes find our homes very appealing. They’ll enter our basements, garages and even kitchens if the conditions are right.

However you feel about them, slugs are a great example of adaptation. A water-bound creature able to survive on the land, who can produce slime from it’s body and has hardly changed in over 500 million years! Next time you see one, get the magnifying glass out and have a closer look at these amazing little creatures.

Leave a question or comment below about your garden slugs and you could be featured in next week’s blog! You can also send your wildlife pictures to: