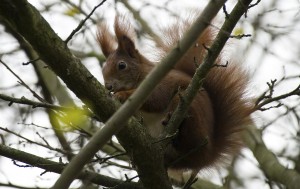 Of the mammals in the garden, perhaps the easiest to spot is the Grey Squirrel. This bushy-tailed rodent can often be seen running up and down trees in the garden and hogging the bird feeder.

But this creature is not native to the UK. Originally it comes from North America and was brought here over 200 years ago for the incredible colour of its fur. Nobody had ever seen a grey squirrel before, because until that time there had only been red squirrels found in England. 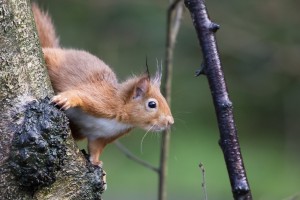 This slightly smaller squirrel was once found nationwide and has been here for a lot longer than the greys. With tufted ears and a more ‘S’ shaped tail, this species was once viewed as a pest, much like the grey squirrel is today.

But when the Grey Squirrel arrived, it brought with it a virus – Squirrel Pox. The Grey Squirrel can cope with squirrel pox, but because the Red Squirrel had never encountered it before, it had no immunity to the virus.

This has made the Red Squirrel a rare sight in our gardens, but this could be changing. 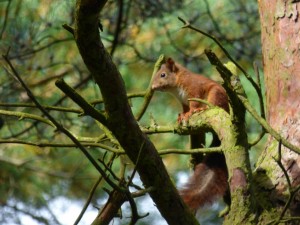 One of the few remaining sites to spot Red Squirrels in Lancashire is Formby Point. Here, their numbers have gradually been rising and sightings of garden Red Squirrels in the surrounding area have been on the increase.

This is also the case in Cumbria and Northumbria. It could be that these populations are starting to grow immunity to squirrel pox. This, if given enough time, is bound to happen sooner or later and if these results are correct, we could be seeing reds return within the next few decades.

So keep an eye out in your gardens in the future for this native rodent – it might just put in a surprise appearance!

To find out more more about what wildlife services we offer at Nature Talks and Walks, you can explore our ‘About Us‘ section.

If you have any questions or pictures of your wildlife, you can leave a comment below or email a picture and you could be featured in our future blogs! You can email us at:

Take care and remember, stay on the wild side!